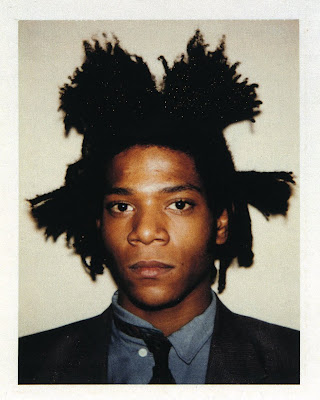 Jean-Michel's PIN code for his Citibank account was "So What?" after the Miles Davis tune.

Soon after the flight took off, Basquiat and his coterie were cozily ensconced in the first-class section. Basquiat took out a quarter-ounce of coke and dumped it on a cocktail plate. "I've never seen anything like it on a plane," says Gagosian, laughing. "It was like these four kind of rough-looking black kids hunched over a big pile of coke, and then they just switched over to these huge joints, and they sat up there and smoked them. It was just wild. They had their big hooded ski glasses on, and big overcoats. The stewardess freaked. I was terrified. I thought, 'Oh God, we're going to jail.'"

But Jean-Michel remained completely cool. "The stewardess came over and she said, 'You can't do that on a plane. The authorities are going to be waiting for you,'" recalls Gagosian with obvious relish. "Jean-Michel just looked up at her. He had perfect timing and he said, 'Oh, I thought this was first class.'"

"Iconoclast, breaker of rules, master of the put-on, Bird was the first jazz musician who carried the battle to the enemy...The act of throwing his saxophone out of a hotel window, walking into the sea wearing a new suit, standing up the promoter of a Paris jazz concert, drinking sixteen double whiskies in two hours, eating twenty hamburgers in a sitting...the patronizing way he took his pleasure with any white girl who offered herself—every episode in the cumulative legend of the Bird, however ineffectual and childish, was seen as a blow struck against the forces of oppression...

Charlie Parker was the first angry black man in music. Because he was ahead of his time, he bore the burdens of loneliness and frustration. The futility of blows he directed at the establishment did much to encourage his dependence upon heroin and alcohol, adding to his loneliness and accelerating an inner drive towards self destruction...In spite of his successes and growing prestige Charlie saw no future of the music he played, or for his race in America. To live once, and to the limit—that was his game plan," writes Russell.

I liked this exchange from right before Basquiat dies where he predicts the rise of Jazz-Rap:

[Vincent Gallo:] He said he was going to buy a clarinet and we were going to do new music together. Jazz-rap. I said, 'What's that?' and he got that sparkle in his eyes and said, 'You'll hear it the first time when we do it.'

Lastly a quote from Jeffrey Wright who portrayed Basquiat in Julian Schnabel's biopic that makes me respect Wright even more and Schnabel even less:

"There's another parallel, that the mystery you are left with at the end of the film about who Basquiat was is the stuff that Julian [Schnabel] didn't know, so he assumed it didn't exist. The sense I got about him from his work and what I found out about his life was a profound sense of aloneness, not loneliness, because he had friends, but a real sense of isolation."

Ultimately says Wright, "Julian made him out to be too docile and too much a victim and too passive and not as dangerous as he really was. It's about containing Basquiat. It's about aggrandizing himself through Basquiat's memory. It's really fucking barbaric. But maybe our culture can't take the real danger of Basquiat right now."

Interestingly the movie, like Hoban's biography, couldn't get permission to use Basquiat's paintings. Schanbel's solution was to invent new ones.

I also made note of the the artists and songs Basquiat liked that were mentioned in the book: